It's a huge pleasure for me to build new relationships with film makers who are just starting out on their careers, especially when it's come as a result of this blog.  Janaya emailed me a few weeks ago with some questions about film, and that got the ball rolling.  Whether I'm able to respond publicly or whether it's just a few words over facebook, I'm humbled by the opportunity to share a few of my experiences in the hopes of spreading inspiration and fostering creativity among those of us who have chosen film, video, and photography as a career path.  In general, I just wanted to say thank you to those of you who have contacted me and who continue to make me realize the value of this journal.

With that, I'm proud to introduce Janaya Hanley:


First of all, I want to thank Luke for featuring me on his website!  A few weeks ago I came across his blog by accident, and read a little bit about Luke and his experiences at the University of Regina, and his flourishing career henceforth.  As a current student in the Film Production program at the University of Regina, I was immediately struck by Luke’s story.  As many students in artistic programs do, I was worried about my job prospects, the quality of a university education, and of course, how much it would all cost.  I emailed Luke with my concerns, hoping for a few tidbits about why (and more importantly, how) he did what he did, but instead he responded to my email in a wonderfully thoughtful blog post.  And what’s more, he’s asked me to share my experiences in return.  As someone who considers herself a story-teller, I consider talking about myself an awkward and often difficult experience.  But I’m very excited to do so today, and hopefully many of you will relate to my experiences, and if I’m lucky maybe I’ll be able to give a few words of wisdom.  So here we go! 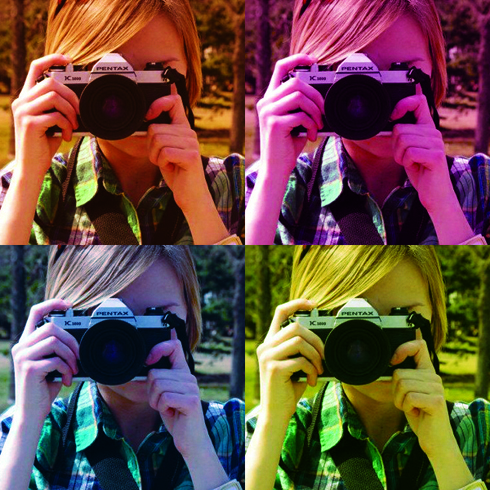 Ever since I was very small, I’ve always told stories.  When my friends and I had play-dates, we would dress up as princesses and reinact our favorite tales for our parents, and even make up our own.  I remember holding up a set of bed sheets in front of the living room like the curtains in front of a play, and pretending to unveil a dramatic production in the making.  A story could never be too complex, or too detailed, to be told.  Growing up, my artistic aspirations were always encouraged by my parents (one of whom was a professional photographer), who supported my dreams – publish a novel, direct a movie, star in a play – no matter how ambitious.
By the time I graduated high school, I had already won a provincial drama award and written the first 300 pages of my novel.  I practiced my skills by making fan-videos and fan-fiction under a pen-name, and learned how to take feedback from my peers and from random strangers on the internet.   I also created a few short films with my cheap digital camera, one of which I’ve included;  it was made a few years ago as a high-school adaptation of Chaucer’s “The Pardoner’s Tale”.  Although the camera work was grainy and shaky at best, I am still proud of the set design and lighting set ups, as well as my ability to shoot the project in a few hours.  I still had a long way to go, but I was ambitious about my prospects.  By this point I had narrowed down my interests enough to decide that a job writing for television was for me, that it combined all of these elements that I loved so much. And all that was left was to go to University and get a degree.

As most University students will tell you, my first year was an eye-opener.  I was wide-eyed and bushy-tailed, a small-town girl in a new city, and I was no longer the top of my class.  The other students in my program had already published films, entered festivals, written for the newspaper, and I had some shaky-camera films and an unpublished draft of a fantasy novel rotting on my desk back home.  It was time to pull up my socks and get going.  I wrote more, did more photography, and filmed a few projects that were less shaky than my previous work.  But in the back of my mind there was the uncertainty of what I was doing.  Here I was, spending a lot of money on a university education that might or might not get me a job similar to the one that I wanted.  And this year, the Saskatchewan Provincial government decided to eliminate the film tax credit that would allow film-makers in the province to be able to afford their productions.  Many of my classmates and I wrote to the premier voicing our opinions, and in return he sent us a generic letter saying that there was nothing he could do.  A lot of these same classmates dropped out or switched majors, and those of us who were left continued to take film classes nervously, wondering what sort of future we had once we left the safety of the brick walls on campus.  The intelligent professors, expensive equipment, and pre-arranged assignments would not be there forever.
As poetic as it would be to say that I had been there and back, I am still not sure where I will end up.  I just haven’t gotten to the end of the tunnel yet.  I surprised myself this year by finding a second love – psychology – which stems from my love of people and their interaction with others.  I imagine myself writing for a tv show with a new and improved understanding of people, thanks to my bright and shiny psychology degree, but on the other hand I worry that it might not be the right road for me.
Any of you who are interested in film or television, or are already looking into such a career, will understand what I mean when I say that there is no set path. If you want to have your life spelled out for you, to have the certainty of a guaranteed job in a specific amount of time, I recommend becoming a doctor or an engineer.  Because there is no set formula for film-makers.  But for those of you who, like myself, are willing to risk the uncertainty to get a chance to tell a good story, to make people laugh or cry, I highly recommend that you do it.  Everyone will have to get there their own way, be it university, a film festival, an internship, or some other road, but don’t pass up on your dreams simply because it’s scary.  I will continue to pursue film in my own way, no matter what “major” I decide to take, and I will always dream of creating and writing for my own television show.  I will have to decide for myself how to get there, which skills to focus on and what sort of projects are most important to me, but it will happen.

For those of you who are in the same boat, my biggest advice for you is this; If you want to make films, then make films.  As easy as it sounds, you just have to find a way to do what you love. There are so many books and websites that will give you advice on how to format your work, and you can take a class (or get a degree) if you need help.  If you need equipment or software, you can get something for any budget, and there are facilities where you can rent cameras and lighting equipment. Even if you get together with your friends and film a movie with your hand-held camera and make everything yourself, you are still practicing the skills you need to make a bigger project.  You’d be surprised what sort of things – costumes, lighting posts, tripods – you can make around the house.  My classmate once roped a camera to a skateboard to get the appearance of a monster crawling on the ground.  Be personable and make contacts in any industry you are interested in, work on your portfolio, and toot your own horn when you have to.  Look for inspiration everywhere, because help can come from the most unlikely places.  For example, I learned a lot about cinematography from my mother, who has worked in the photography business for over 30 years, my 6th grade teacher taught me a lot about writing, and the post Luke wrote in response to my email was ripe with advice.
Fall will come before we know it, and onto another school year.  I cannot say how I will make my way yet, but I will continue to work on my skills, expand my contacts, and do what I can to make better and better work.  Although I still get overwhelmed by my future, I know that every young person feels the same way.  I will keep doing what I love, continue to work with my classmates and learn from those who inspire me, and I will figure it out.  If you keep at it, you will too.
A big thanks to Luke, and to all of you who are reading this.
Edited by Editing Luke @ 8:00 AM

Thanks a hundredfold for this, Luke!

My pleasure, Janaya. I'd love to have you write another guest post in the future as you continue your education. Stay in touch.