Last night I was glued to my computer, not because I cared about the hockey game, but because I was fascinated by the developing riots in Vancouver following the Stanley Cup final against the Boston Bruins.  I found myself increasingly agitated as things erupted.

Why would anyone want to do this to their own city?  It's a hockey game.  How does someone make the justification for lighting a car on fire, for looting from a department store, for engaging with police - over something as inconsequential as this?  I understand this doesn't mean the entire city of Vancouver was at fault, but it is the city who'll pay for it.  And who can focus on anything else?

There were bright spots to talk about before the game loss, like how a large amount of the Boston Bruins players are actually Canadian born.  Or how the Canucks actually made it to Game 7 of a Stanley Cup final!  Now it doesn't seem to matter.  This morning no one cares about the game anymore, and frankly I feel disgusted that something this petty has ended up leaving such a giant stain on Vancouver and Canadians in general.

For all the stories and pictures I've come across, I found Brian Hutchinson's piece from the National Post to be particularly well written.  You can read his story, Blood on the Streets After Vancouver Loss here.

And to all those who looted and rioted, I can only hope that all of the videos that are uploaded and all of the pictures that are posted only help to make you feel more guilty and responsible.  I hope you're caught.  I hope your friends and family see your face in the paper or on TV and tell you what a tool you really are.  Of course, some idiots are quick to incriminate themselves. 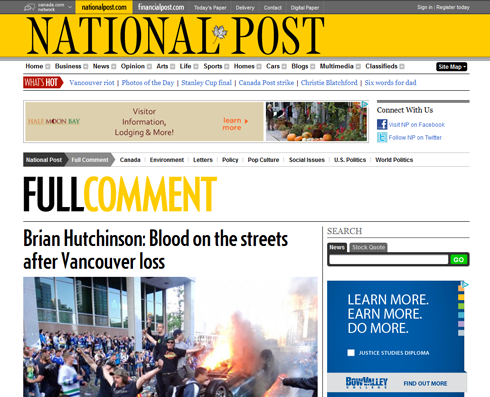 I pay exactly zero attention to sports or the news most of the time, so this is the first I've heard of this. It's human actions like the ones in Vancouver that have the potential to make me seriously depressed about humanity in general (perhaps why I don't actively watch the news). I hate it when people think they have the power to just do whatever they want, regardless of who it hurts.

These people should all feel very ashamed of themselves, and I can honestly say that I'm ashamed to be of the same species as these low lives. I agree with you Luke and hope that they are caught as well.

It's just a game. A GAME for crying out loud.

I agree with what your both saying, this was an idiotic act - and most people agree that for whatever reason a riot was going to happen regardless of whether the Canucks won or lost. I get people are stupid sometimes, but if the Roughrider fans in Regina completely avoided a riot when they lost the Grey Cup 2 years ago to the stupidest mistake in CFL history, it makes me wonder where this kind of thing even comes from. Or, as you both point out - WHY is even comes about.

This story would make a great basis for a Sociology paper, no doubt.