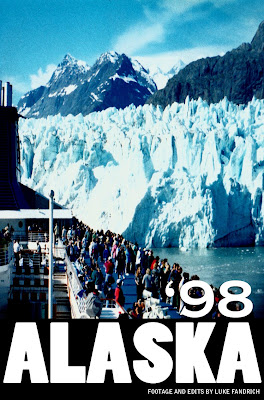 What makes these edits significant, besides the beautiful and epic Alaska scenery, is that it's some of the earliest footage I ever shot. It was 1998 and I was 14 years old. With my parents matching half of the money, I purchased a used 8mm Sony Handycam at the age of 12, and from there made a wealth of now embarrassing short films and projects.

A family cruise to Alaska in August 1998 proved the perfect opportunity to make my first vacation video - and real home video for that matter. By this point, the film Titanic(1997) was an international box office smash and I couldn't help but think about the movie throughout the trip. Standing at the stern and watching the wake of the ship, looking out across endless ocean, and a trip into Glacier Bay to see larger than life ice, made it seem like My Heart Will Go On was the only thing missing (that, and a nude girl to draw, but I digress).

In the days before I had a digital video camera or editing software, I did my editing on the VCR. So needless to say, the original version of my Alaska video was pretty rough. There was no music added besides the clips of hand made titles that I interspersed between days of the trip. I was also in the frame of mind that more was better, and not wanting to cut out anything from the trip I was left with over an hour of mostly raw footage. Oh, how I've grown up.

In 2003 I cut a brand new version of the video from the original footage titled, North to Alaska. It was far more enjoyable to watch, and by that point I was able to burn DVD copies for the family. By 2006 I decided to cut down all of my vacation footage further and created a series of video postcards, including one for Alaska. 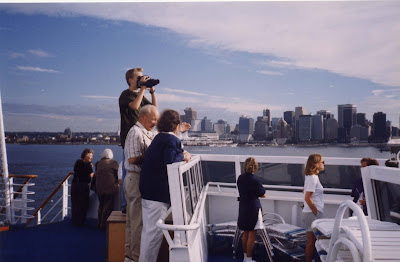 Me with my camera on the deck on the cruise ship leaving Vancouver, BC.

Now over a decade after the trip to Alaska, I still have a special affinity for the footage and the project. It's not just being able to see my early work and style, but also the renewed appreciation I have for what it was I was actually witnessing - it really was an adventure. Highlights can now be viewed in four clips - the original Alaska postcard, Vancouver, Glacier Bay, and the White Pass & Yukon railway.

Part of getting older is realizing how important it is to appreciate the here and now. It's something I wish I would've said to myself back then, because my memories of 14 are pretty scattered and random. It's for that very reason that I've become so enamored with documenting my experiences and travels. It's not as good as being there again, but for me it feels close.

Take a moment to check out my now classic edits below.