So, if you happen to follow my Editing Luke or Around the Hat facebook pages, you'll already know that last week I announced that I'd been commissioned by the City of Medicine Hat to create a permanent art installation as part of the new Medicine Hat airport terminal expansion. Naturally, I'm pretty excited about this for a number of reasons, but I think I'm most excited because it marks the first time that I've been given the opportunity to share my work as part of a permanent public display.

I'll admit right now that I won't be revealing the images for the art installation just yet, but I thought I'd share how this all came about and the general idea behind the the proposal that I put together.

Earlier this year I sold some images to the City for them to create the cover for this year's Annual Report. It was already clear at that point that they were incredibly supportive of the photo library that I'd built, most notably for my Around the Hat collection. Since my initial meeting with city hall one year ago, our discussions have been ongoing about potential opportunities to utilize my photography and video for different city projects.

Despite all of this, it took me completely by surprise when I received a call about an art installation and that my name had been brought up. We took a meeting and I was essentially presented with a blank canvas - roughly a 3.5x3.5 meter wall at the end of the main hall that runs the length of the airport. It's next to the main entrance, just off of the restaurant, and is probably one of the most visible walls in the entire building.

It seems that this was a conversation that must have come up late in one of their meetings, because despite several preliminary plans they suddenly went looking for an artist (and luckily, I had made an impression). The sense of urgency around the art wall was that the project needed to be completed (aka budgeted) before the end of the year. I was then tasked with coming up with a proposal and quote for the project, sourcing a printer, and making sure we had the final work delivered in a matter of weeks. 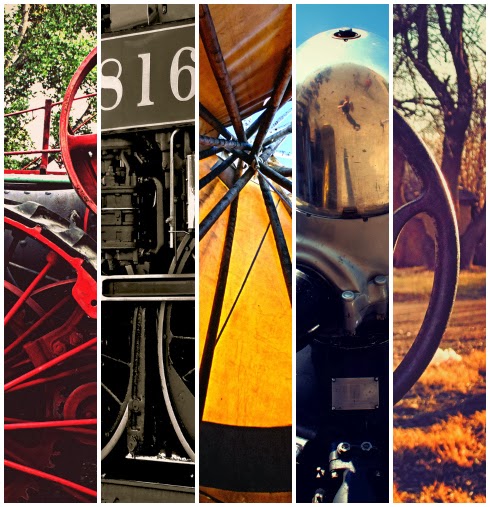 Here's a teaser - 5 cropped photos from the 12 images I selected for the project.

With this being a prominent display, I quickly dismissed the idea of just doing a few framed prints in a traditional gallery style. I had it in my mind that large panels were the way to go. A display that was durable, somewhat theft proof, and that could be easily cleaned were also concerns I wanted to address. Above all, I wanted to present something that made an impression in that space - not just put together a few nice pictures of the city and be done with it. I approached the installation as a stand alone art piece, and immediately decided that I wasn't going to use obvious images of Medicine Hat (like the Saamis Teepee, etc.).

I wrote in my proposal, "Instead of taking an entirely literal approach to Medicine Hat's landmarks, I've experimented with close ups and details of specific locations/objects. I want the variety of the installation to feel local and regional by using the panels as clues to larger concepts - they should work individually and as a collective".

Therefore, my installation is big on textures, and the variety of images play well off of one another with shapes creating a common theme among them. For the panels themselves, I proposed a set of twelve 28x28" panels printed on 1/4" optically pure acrylic. These panels are then mounted using stand-off hardware, which means they're raised several centimeters from the wall by a rivet in each corner that's screwed into the wall. At 3 panels across and 4 panels up and down, the result is a diverse collage that will fill that wall and paint a picture of the region through textures, colours, nods to history, and a focus on various modes of transport. If you're familiar with my love of graphics and colour, you can bet it will be eye-catching.

I got the okay from the city and then my proposal was approved by the public art committee last week before I finally made the news public. In the end, I faced no objections to my image selections, my choice of printing on acrylic panels, my theme, or my budget. If every project I did ran this smoothly I'd be a stress free man. As of Monday, my final images have been sent to the printer in Toronto and now I have a few weeks to wait before the panels arrive.

The Medicine Hat airport expansion isn't scheduled to be complete until 2015, but my artwork could go up as soon as spring 2014. The wall is technically in the original portion of the building and those renovations are supposed to be done much sooner. In the meantime, I'm keeping the artwork a secret - at least until the panels get here.