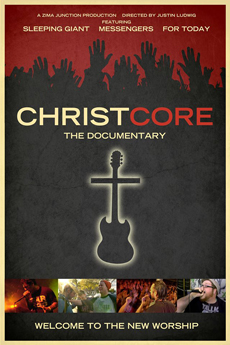 Fellow University of Regina film school alum, Justin Ludwig has a new documentary that he directed playing in Medicine Hat from June 13-15 at the Monarch. We had several production classes together back in the day, and here's what he had to say about his project:

ChristCORE is a feature documentary that follows my journey into the world of evangelical Christian hardcore music. As someone who grew up in Regina's punk and hardcore scene, the music was a catalyst that helped to un-do my religious upbringing. The scene is traditionally secular, which is how I thought it should stay when I first became aware of the Christian insurgence which started to make waves in Regina ten years ago.
However, what started out as somewhat antagonistic concept grew into a film that strives for dialogue and understanding, opening up the world of the Christian hardcore movement to a whole new audience who may have never thought such a thing could exist. It's a film for fans of the scene as well as those who hate it, offering a glimpse into life on the road for two very different bands, newcomers Messengers and genre stars Sleeping Giant. We see faith healings, mass baptisms and some violent mosh pits, leaving the judgements to the viewer. Come check it out and support independent Canadian film!

ChristCORE screens Thursday to Saturday at 7:30pm at the Monarch.