The following comes from my column, Spliced from Volume 47 - Issue 23 of the Carillon (the University of Regina newspaper) from April 2005. 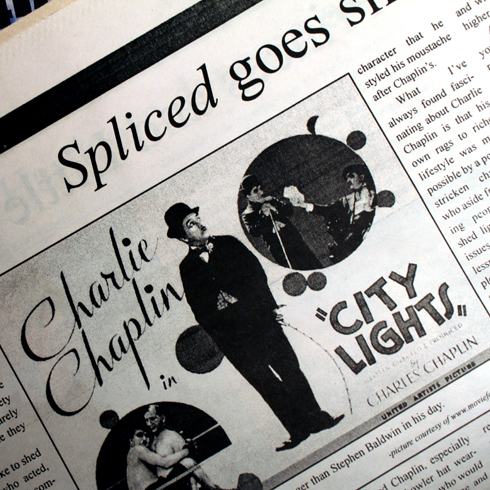 In film history, or just entertainment in general, there are few artists or projects that are able to bridge generations and that warrant a position in the collective consciousness of a society made up of people that can barely remember the name of a movie they saw a few weeks ago.


With this in mind, I’d like to shed some light on a figure who acted, directed, wrote, produced, and composed the score for many of his films.  A character who you've no doubt seen mimicked, and a man who even if you've never seen one of his films, you’d likely recognize from a picture of early Hollywood big wigs.  Of course I'm speaking of, Charles Chaplin.

Born in London, England on April 16, 1889 Charlie faced extreme poverty, only made worse by his father‘s early death and his sickly mother.  By the age of 21 he became part of a travelling music-hall company and found himself in the United States where he was well-received by audiences.

Charlie’s ambition and resounding talent led him to a film contract in 1913 with the Keystone Film Company for $150 per week.

In 1914 Chaplin made over 30 short films, and by the end of that year had signed a new contract for $1250 per week.  Needless to say, audiences loved Chaplin, especially his cane twirling, bowler hat wearing, little tramp character who would later skyrocket Chaplin‘s name and career internationally.

On a side note, one German dictator was such a fan of the tramp character that he actually styled his moustache after Chaplin’s.  True story.

What I’ve always found fascinating about Charlie Chaplin is that his own rags to riches lifestyle was made possible by a poverty stricken character, who aside from making people laugh, shed light on social issues such as homelessness and unemployment.  This was something Chaplin took great pride in throughout his life having faced these issues head on.

Chaplin, who began feeling restricted by the studio system, gained independence in 1917 when he teamed with Mary Pickford, Douglas Fairbanks, and D.W. Griffith in forming the United Artists Corporation.  Artist’s under the label essentially became their own bosses, and when your career can’t go any higher, that’s a big deal.

As for Chaplin‘s brilliant films, if you‘re not familiar with his work, I recommend Gold Rush (1925), City Lights (1931) or Modern Times (1936) to get you started.  Each one of these films is a shining example of Chaplin’s spot-on routines and the tramp’s infectious lovability that extends from situations he mistakenly becomes involved in.

Modern Times is my favourite film of Chaplin’s.  Some may remember a scene where Charlie slides through the cogs and gears of a factory, or his repetitious fidgeting caused from screwing in bolts on an assembly line, or his hilarious mishaps with an automatic eating machine used to save time on lunch breaks.  I’m laughing as I write it because it really is that funny.

Charlie Chaplin’s significance and staying power is no accident, and you’ll understand why when you watch any of his films.  For the record, all of his major works are out on re-mastered DVDs so there’s no excuse.  I guarantee laughs will be had.