Shooting Locations (and the Payoff)

One of my biggest projects this year has been documenting the landmarks and scenery of my hometown, Medicine Hat, Alberta.  This photography series, Around the Hat has not only transformed my appreciation of the place I live, but it's brought hundreds of additional readers to my blog every week who seem to find my approach interesting.


From the history of these locations, to the style of my photography, to the comparisons I make between archival images and the locations today, I feel like I've stumbled into fresh territory with regards to the scope and detail of the image library I've built of Medicine Hat. 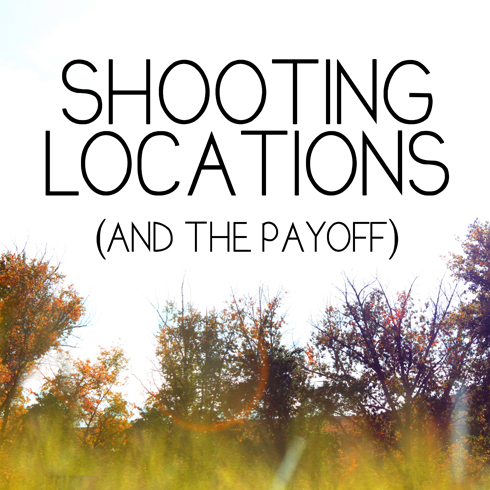 What's happened is that I've started to capture every place I've visited this year with this same obsessive focus on the details.  Up until a few months ago, I was perfectly satisfied doing this to serve my own creative ambitions, and frankly, the fact that all of this stemmed from simply being passionate about what I was doing has made some of the recent success only seem sweeter.  As it turned out, one facebook post changed everything.

After a visit to Regina this year over the Canada Day long weekend I shot a series of images while exploring the new city square downtown.  Happy with the outcome of these shots, I posted them to my blog and shared the post on the City of Regina's facebook page, which is where it got noticed.  The post was then shared on Downtown Regina's facebook page and by the Regina Regional Opportunities Commission (essentially Tourism Regina).  It was from this that the RROC got in touch with me directly and things began to happen.

All of this went down in August, and I was just excited that Tourism Regina was so interested in my work all of sudden.  They used a few of my images on their facebook page (always giving me credit) and discussed potential opportunities for my photos to be used elsewhere.  The real kicker came when I was told that they'd put me in contact with someone at DirectWest, and that one of my images had been considered for the City of Regina phone book.

This was great, but I'd been considered for lots of opportunities before, and my experience with how proposals usually unfolded when working at Stream Media told me not to get my hopes up.  Then the call came in yesterday.  After a few weeks of deliberating they picked my shot for the 2013/2014 cover of the Regina phone book!  I'll be getting a nice chunk of change, will potentially see my image in print ads to advertise the phone book, and will have my image used in the City of Regina business calendar that gets sent out to over 9000 businesses who advertise in the phone book.  In short, I had a really good day.


While the extra payday is certainly welcome, the exposure and story are really what make this for me.  And going back to what had happened earlier in the summer, the discussions I had after being contacted by Tourism Regina really got the wheels in my head spinning.  Realizing that I was amassing such a large collection of images around Medicine Hat it became obvious that I had to get in touch with Tourism Medicine Hat too.

After sending them an email a few weeks ago with a link to my portfolio and the preview video I posted below, Hideaway Studios (who does the Tourism materials for the city) was quick to respond saying that they'd like to set up a meeting.  We finally had the opportunity to talk earlier this week.  The irony of the meet up is that their office is in the Citadel Building, right next door to where Stream Media's office used to be.  It looks like there's a lot of potential to explore with them too.

At the moment I'm in the process of sharing my library with Hideaway Studios and from there they'll be able to tell me if they'd like to license some of my images for use in various publications, etc.  While nothing has been agreed upon at this point, I find it flattering that they're even as interested as they are.  These recent experiences have been a tremendous eye-opener in understanding the potential value of what I've been creating these last few months.

The online success of Around the Hat also has me exploring the potential for a photo book, or even applying for a government grant to put together an exhibit.  I've already had some people say to me that my shots of the Hat would make for a great display at the Esplanade.  Now there's something to aim for.