Lessons Learned From the Kony Video

Seeing Kony posters pop up in little old Medicine Hat, Alberta was a bit of an eye-opener. Not because people had seen the video on the internet, but because the video, this viral sensation, had compelled people to go out and do something.  I don't even want to get into the whole debate about Kony, or talk about how getting your dick out in public isn't a great strategy to help your charity, but I do want to discuss the video.

Specifically, I want to identify a few of the reasons why I believe the Kony 2012 video was a success and what we should keep in mind when making/marketing our own videos. So, allow me to brush away some of that media fallout, and let's explore. 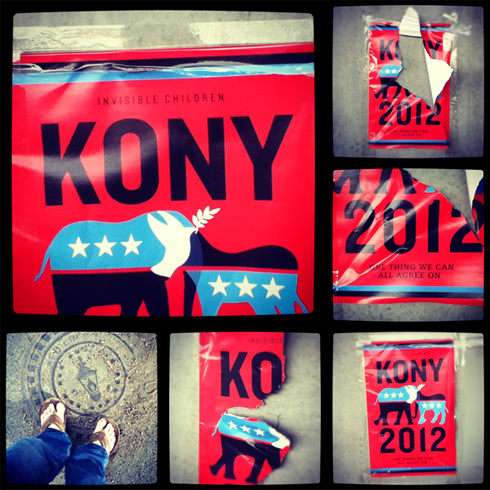 Going purely on their visuals you have to give Invisible Children credit.  Their posters and merchandise (so much red!) were incredibly eye catching and well designed.  The republican and democrat symbols forming a dove was symbolic of the campaign and the action required.  The contemporary branding was also consistent throughout all their outlets, and they actually made charity look trendy. Going bold worked.

2.  Target Audience.
In creating their video, Invisible Children was very successful at acknowledging their target audience - AKA those who may not know anything about Africa.  That's not meant to be insulting, in fact, they did a great job of not talking down to the audience.  They skillfully built their message on the ego-boosting message that we were the ones who had the power to change everything and make it right.  It was both universally aware and targeted at making individuals realize that there was a role ready for them to adopt. One of the big criteria in developing any message is understanding who you're talking to, and they were successful at making a big issue seem accessible.

3.  Call to Action.
The kicker in all of this was how urgent they made the issue seem.  Forcing an expiry date for the video, the cover the night promotion, and the sincerity of their plea to spread the message created specific goals for viewers who were willing to help.  Follow through is always a big deal in promotion, and making it clear that there were simple steps already laid out served the campaign's goal.

4.  Celebrity.
While this one isn't so easily achieved, the video exploded off of the success of celebrity tweets and social platforms.  The goal of targeting big names who might be interested in the subject matter was smart though, and just by getting tweeted by a few of them they opened their video to millions of potential viewers.

5. Simplicity.
Although their facts really just skimmed the surface of a very complex issue, they were thorough in explaining their focus, goal, and the wrong they wanted to right.  The length of their video ultimately played in their favor by raising and answering questions.  It also served to show that the campaign was already in swing and that a lot of the hard work had already been done.  In short, it made it easy for new followers to hop on the bandwagon with a semblance of knowledge and champion the cause.

6. Luck.
As quickly as Kony 2012 went viral, the real work didn't happen overnight.  The charity and campaign was years in the making, and their well-timed strategy was a masterclass in orchestration.  A slow build of followers and supporters gave them just enough strength to push their concept off the ground and let the wind take it.