One Upgrade After the Other

This last month has been an expensive one.  I bought myself a brand new suit, I've spent more on my car than I'd care to admit, and now after several nights of frustration I've gone ahead and replaced the CPU for my editing suite.  On the positive side of things, these were all worth while expenses that needed to be addressed.  On the downside, they were all worth while expenses that had to be addressed immediately within just a few weeks of each other. Ouch!

This is really about my editing suite though.  The issues with my computer started just a few days ago, but became increasingly worse very quickly.  It was either my video card or motherboard that was failing, and after a few hours of research on the cost for replacements I decided that I should just put my money towards an overall system upgrade.  I'd been toying with this idea over the summer, but temporarily shelved it when my Jag began crying for some new parts.

I purchased my last computer late in the summer of 2008, and it was really just at the beginning of this year that I began overhauling my existing setup.  New software soon followed, and I added a laptop to my arsenal in the spring.  Now here I am in the fall and I've shelled out more money yet again for my PC.  This time I opted for a more powerful six-core processor and a more robust video card.  I'm genuinely happy about the increased performance I can expect while editing more intensive projects, but still, this wasn't the plan and if my old system hadn't crapped out I would've been fine with it for another year.

Aside from the pain of being forced to make the decision to upgrade now, the transition was actually easier than it had ever been.  Having all of my files, photos, music, and past projects archived on my various hard drives, upgrading simply meant reinstalling a few key programs.  Everything else I was able to access off of my drives just as I did before so there wasn't really that much to do.

I know this is really an investment in the work I do, and were it not for the professional editing I have to complete I probably would've made an excuse to live off of my laptop for awhile.  But, here's hoping I can now get around to writing something about how awesome the editing suite I've been upgrading all year finally is!  I could really use a silver lining right about now. 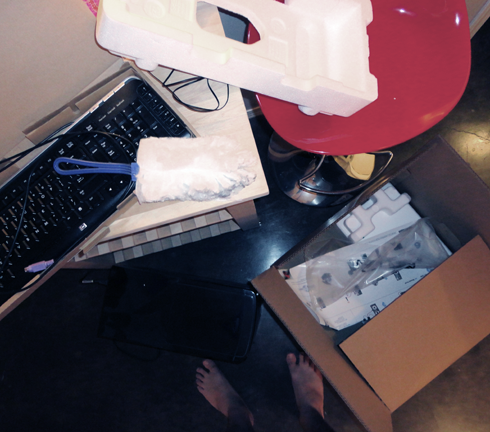