With the holiday season upon us, my latest short, We Two Kings, marks the first time in several years that I've really gone out of my way to make a Christmas special. It's also the first time since Buick to the Future: Episode 4 (over a year and a half ago) that my friend Tyler and I have worked together on a project. Milestones aside though, what makes this short so memorable and exciting in my mind is how quickly the idea, shoot, and finished movie came together. 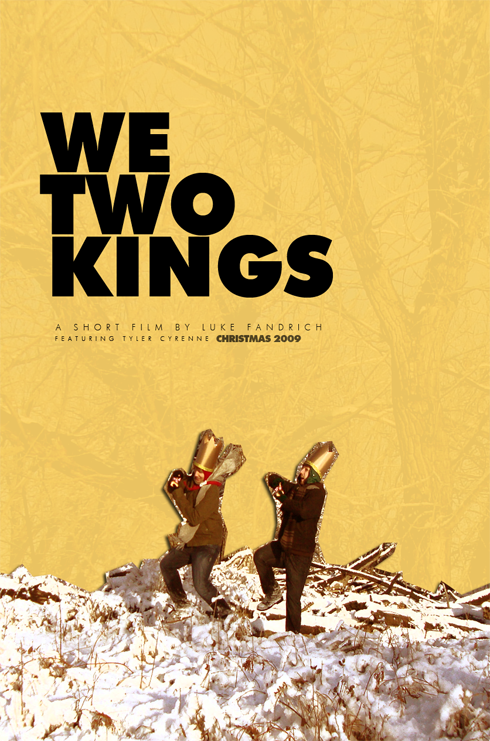 Tyler had talked about coming to Medicine Hat from Regina at the end of November for a visit and I suppose that's what sparked the idea for a Christmas short. I started writing out a rough script and thinking about locations which eventually had me focused on a simple comedic spin on the 'We Three Kings' Christmas carol.

As if on cue, the day that Tyler arrived we got snow. That Saturday morning you couldn't have asked for a better Christmas setting. The temperature was cool, but not cold, the snow was untouched and sticking to the trees, and the wind was almost non-existent. Armed with our winter gear and our hastily constructed gold crowns, we headed down to Police Point, a giant natural park on the outskirts of the city to film. 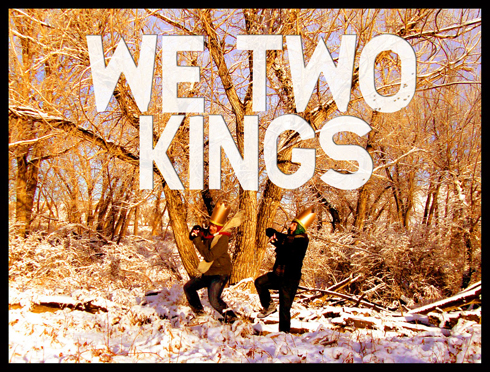 The long and short of the story is that things continued without a hitch. Just as we were losing sunlight, we shot our final scenes. Our crowns held up as did our feet after an entire afternoon of walking around in brush and snow. With a few curious people looking on from their walks from time to time, the short came together relatively quickly, and surprisingly exactly how I'd written it.


As part of promoting this new project I cut together a teaser trailer. Thanks to my account on YobiFilm that trailer (at the time of this post) has already been viewed over 37,000 times on that site. To say that I've been excited about sharing this project is an understatement. I think it's turned out really well and I hope it helps to get you in the Christmas spirit.

Also, I'd like to thank my friend Tyler for helping me out once again in not only bringing my rough idea to life, but for getting just as energized about the project and injecting his own energy into the mix. I think the fun we had making this shows, and when you have no budget, enthusiasm is the best currency. So, without further delay, enjoy a short that we're sure to talk about for many Christmas' to come.

LOVE the 'guy dialogue' between you - er, sorry Frank - and your buddy Murray.

All I'd give as feedback is that the soundtrack (at least played via my iPod station) sometimes is louder than your dialogue.

Thanks Kath! You never know, the journey could certainly continue next year. I appreciate your feedback.

I know what you mean about the audio also. You need a bit of bass to balance it out as some of the dialogue was captured at a distance and was quiet to begin with. I maxed it out in post production and used my soundtrack to cover some of the distortion - which became a complicated mix in itself. All a work in progress I suppose :)

It’s a Christmas miracle!! Well done, sir. First off, lemme tell you I am honoured to have been part of this film. You are more than welcome and I hope to be part of another Fandrix short, soon. Secondly, this is probably one of your best works to date. The editing is brilliant and brings the story to life. You put a lot of work into the way the scenes came together and of course the music is glorious. I imagine the soundtrack took just as much work if not more than the shots did to put together and mix, and it definitely shows. And those crowns… oh how I still feel like a king when I wear it around the house, and to the mall, and to the movie theatre (the people that sit behind me aren’t big fans of it for some reason). Love it! I’m up for a sequel if you are! Merry Christmas, one and all!

Thanks Tyler! I do like to think that my work is getting better and better with every project, and I am really proud of how this one cut together so nicely - especially without me actually being able to stand behind the camera that much. Who knows - maybe the journey of We Two Kings isn't over . . . only next year will tell.