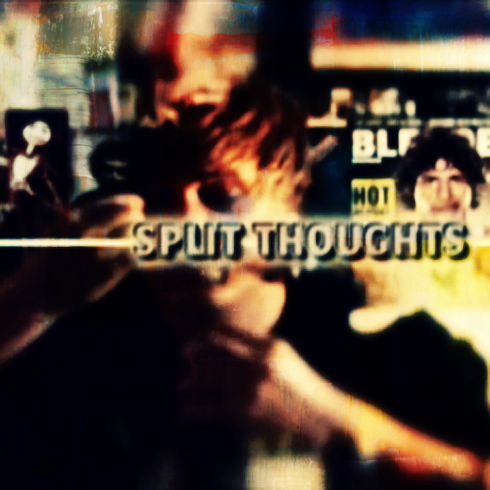 Borrowing on the technical inspiration of my short Split Wash, Split Thoughts has an obvious personal edge. Again, it's light on actual substance but I felt motivated to put together this little short after thinking about all the vlogs I've watched on YouTube and considered what the act of filming yourself meant.

It got me thinking, what if you don't know what to say or how to say it? Is it simply a self portrait? Is it just a way to command attention? It's a bit of all of this I think. As simple as it is I find there's something reflective and haunting about this short. What is a filmmaker/editor anyway if not indulgent and gratuitously searching for artistic gratification? We're all entitled to our moments I suppose. 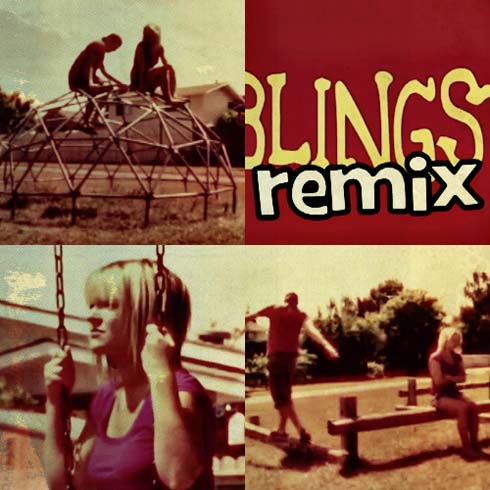 It's the famous quote Vince Vaughn shouts to Jon Favreau in Swingers, as they drive into Las Vegas for a night of unabashed fun and adventure.  Who can blame them?  It's "Vegas baby, Vegas"! I'm hoping to create some hilarious and random memories of my own when heading back to the Vegas with my friend Andrea at the end of November. 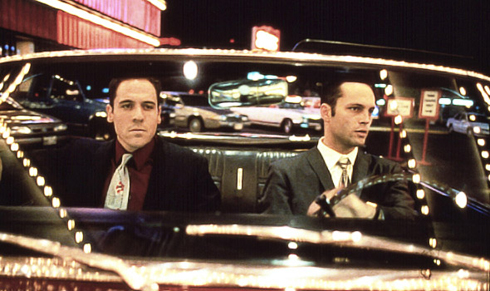 I was last in Las Vegas in 2005 just weeks after turning 21. Now 24, I'm going back to a whole new Sin City with a bit more knowledge, and a lot more on my list to do. My friend Andrea and I are staying at the MGM Grand for starters, which is a nice upgrade from the first time around. We'll also be making the trip out to the Hoover Dam and taking in a Cirque du Soleil show.

We got a kick out of just exploring the strip and casinos back in 2005, which essentially made it a lot easier to narrow down exactly what we wanted to do this time. It was a rush then, and with a bit more money in my pocket and a general upgrade in everything we plan on doing I know it's going to be even more awesome now.

In my adult travels this is the first time that I'll be heading to the same vacation spot twice. It'll be cool to see how much things have changed, which in Vegas doesn't take long and I know that since being there the Stardust and New Frontier have both been imploded (you can see the signs in my video below). As per usual I'll have my camera with me again to capture the highlights. I can't wait! 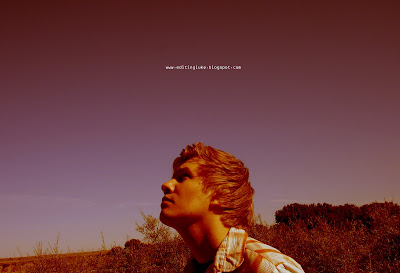 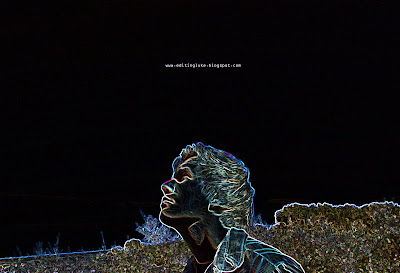 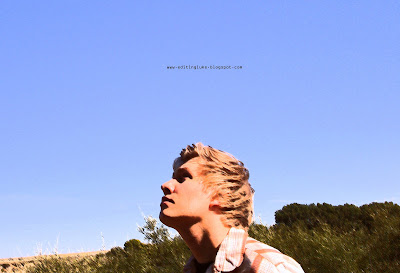 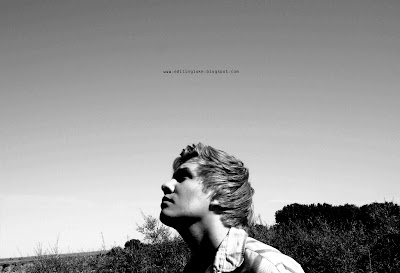 Self portraits (and plugs for the blog). Aren't filters fun?
Edited by Editing Luke @ 2:45 PM 2 comments :

I think there's a certain solemness that goes along with being an editor. It's the ability to sit in front of a computer screen for twelve hours straight, creating something, refining it, and still wishing you didn't have to stop to sleep. It's being an organizer, the guy who gets to pull all the loose fragments together and essentially gets to create the message of the work. I've always felt that as long as the coverage in the shooting was well done, it was in the editing that the story got told. It's a personal experience executed with the foresight of knowing how your target audience will respond.

Still, it's lonely out on this independent limb.

One of the few things I actually miss about film school was the collaborative element that came with developing and refining various personal productions. It was the best of both worlds. You still got to pursue the project you wanted, but subjected it to a slaughter of criticism from people you respected and loathed. As uncomfortable or gracious as it could be, it lit a fire. Just knowing that you were being challenged, that you were in competition, that you actually stood next to a crowd when they were watching your work created this sensational rush and excitement. It was a high that lasted only a few minutes, took weeks to get, but was completely worth it.

On all accounts 2008 has been a very successful year for me. But, while my work screens in Montreal or the UK, while people read my blog or watch my 70+ YouTube movies, I'm disconnected from the experience and have received only a sliver of feedback in contrast to the work it took to actually achieve these things. It's reaffirming my frustrations as I don't know how much harder I can push just to get some of that meaningful 'outside insight' back.

Part of this frustration is also associated with having no one like me in my social circle. As self absorbed as I know that sounds, I mean having friends who produce their own work as prolifically. I think I'm hungry for that challenge again, and even more so, would love to collaborate on quality projects without feeling that I have to initiate and steer the entire production. After all the work I've put in to developing a resonable online persona for promotion, I don't want to collaborate just for the sake of having another voice, and I don't want to feel like I'm merely a source for equipment and publicity. I want to be sparked by someone who has just as much confidence and belief in what they're creating as I do. (My friends are great by the way, but) I want to stir the pot a bit.

I know the answers I want to hear, and reminders of one's own passion and perserverance seem to require review from time to time. I'm still growing and trying to find a path, while at the same time I think my pursuit might be easier if I were to focus on making and promoting a single series of work instead of this grab bag of variety. One way or another I'd like to introduce new faces to the mix. It's tough to balance, but it is what it is. Like I said at the start of this post, I can sit at this monitor for a long period of time; Long enough to re-edit, review, renew, but more likely, to continue searching for what I'm looking for and challenge myself again.

It may feel a bit lonely at the moment, but I think if I make my intentions clearer while continuing to diversify my work and approach, there's a good chance that new faces will emerge. Time to take a few more risks.
Edited by Editing Luke @ 6:52 AM 5 comments :

Part of the fun of this blog is the ability to share the things I love. Have you seen this latest preview for the Discovery Channel starring some of the network's celebrities? This is the American version, the Canadian one has the guy from Daily Planet and the guy from Canada's Worst Driver in it, but it's basically the same. It gives me the chills, and I agree - The World IS Just Awesome. 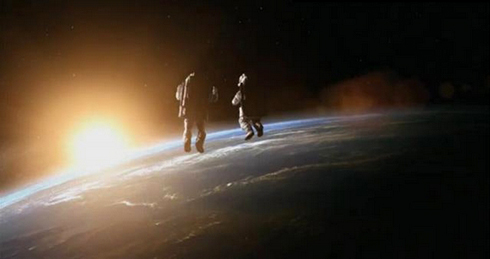 So I was going to get myself something to eat and pull through the A&W drive-thru. I'm getting a Papa Burger and Onion Rings - an award winning combination. The woman at the drive-thru is in her forties and she types in the wrong charge for my order, apologizes, and as I'm sitting in the Buick waiting for my food I see that there are two teenage girls (also employees) giggling in the background.

I have to say that it's a bit un-nerving sitting there, feeling like you're on display while inside people chat away looking in your direction. Anyway, I brushed it off and got back to listening to the Verve (excellent). Then one of the teenagers comes to the window, opens it, looks for a few seconds and walks away. So it was clear they were checking me out, and as the forty year old woman returns with my food she asks 'how old are you'? I respond, '24'. To which she replies 'that's too old'. And I said, 'I know' and drove away.

I'm sitting at home, continuing to upload music to my iTunes account and take a bite of my burger. I grab a napkin out of the bag, wipe my mouth and then see it. The girl, who must've been like 16, had written her name and number boldly on the otherside of the napkin. I immediately thought of the A&W commercial (which is exactly this scenario) and laughed, thinking that this really is an honest representation of what happens at the restaurant. Obviously by getting rings I'm showing that I'm interested in marriage, and my Papa burger clearly shows my desire to be a father - right?

An interesting trip through the drive-thru in any case.
Edited by Editing Luke @ 9:02 PM 1 comment :

I think we've all been there more times than we care to recall, but computer trouble has plagued the last couple of days for me. At the end of April I took it upon myself to buy a new PC to provide more space for projects, replace a dvd drive that didn't work, and to generally just improve my computer experience. Fast forward 4 months and after a weekend of a corruptive virus, a messed up hard drive, and a relatively new monitor literally just shutting off and not turning on again . . . that system is toast. 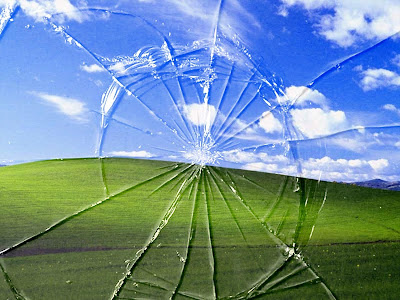 I was away at a wedding this weekend, also acting as videographer, and the thought of having to deal with my computer when getting back into town was a thorn in my side. Getting back and realizing that none of the anti-virus software had worked, mixed with the monitor just dying led me to scratch the whole system and act on my frustrations impulsively.

So here I sit at another new computer in just months, although I have to say it is beautiful and thanks to Back-to-School sales it was a steal. A few more bucks and someday I'll invest in a Mac strictly as an edit studio, and a PC for the rest. In all I was only without my computer for about 3 days, but it's a wake up call as to how dependent I am on it. It's not just a personal computer, but it's also a neccesity for my day job to edit and review productions I'm working on. I instantly fall out of the loop when email, msn and facebook aren't an option, and not having my blog or youtube account sends me into creative withdrawl. It's the problem with having a machine that performs so many functions, as soon as it doesn't work you're lost. Had I not been a kid playing with toys at the time, I might be more curious as to how people got by without the internet.

Oh well, everything is getting back to normal now. The new computer has 80GB more space than the previous one, I upgraded to a newer version of my editing software, and rebuilding my iTunes library is actually kind of fun. Yes, I am searching for the glass half full side of this experience.
Edited by Editing Luke @ 3:06 PM 2 comments :