You've likely heard about it by now, but if you haven't, there was a significant fire at Universal Studios Hollywood on Sunday June 1, 2008. It reportedly destroyed 3 city blocks of the backlot, including portions of the famous courthouse location from Back to the Future and the famous animatronic King Kong exhibit. There are several conflicting reports about the courthouse, but it now seems that it was the square in front of it that was destroyed, and the courthouse building itself was only partially damaged but is still standing. The Universal park website shows the extent of the backlot effected (see the map). On top of this, somewhere between forty to fifty thousand film reels were burnt in one of the studios' vaults.
No doubt all this damage has taken it's toll on the theme park, but Universal Studios is still remaining open with some obvious revisions to the tram tour.
I guess what strikes me most about all this is that these portions that were destroyed were some of the quintessential Universal landmarks. They've been the scenes used to advertise the park for years and now they're in shambles. The news footage looks just like the blockbusters you'd expect to be shot there. It's quite sad.
Here is my video of Universal Studios that I shot in 2004. It includes the New York portions of the backlot, the Back to the Future scene and the animatronic King Kong which are now either seriously damaged or completely gone. 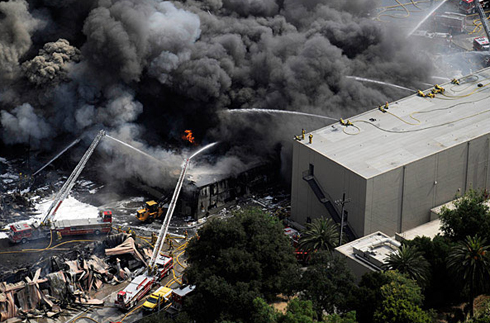 For more news on the Universal fire click here.
Edited by Editing Luke @ 8:10 AM