You must be aware that the Writer's Guild of America is striking. How could you not be? It seems to be the only thing people on tv are talking about anymore. I get it, I understand, I think the writers deserve their share but I'm sick of it. Especially the late breaking excuse for news on ET. Let me tell you ET this is not breaking news, it's the same bloody thing everyday! Execs, just give the writers their share and let's move on! 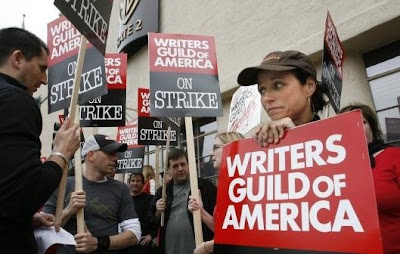 My patience with striking is also wayning due to the strike going on with service staff here at the university. It's already in its second week and I just finally starting getting my mail again (since I live on campus it's kind of a big deal to have people working in the office).

It's pretty much the same issue, the big guys at the uni holding out on everyone else even though they've been increasing tuition every friggin' year. Anyway, I thought I'd start a new category on this blog titled 'In the Media' where I'd share bits and pieces every now and then about what's going on in the entertainment world - or the real world. Sorry, no celebrity gossip, but tidbits about highlights that grab my attention.

I don't plan on repeating much of the news, that's what everyone else is for and honestly I don't get enough readers that it would even matter. Mostly I'll share things that I've found in relation to bigger stories more or less. Here are several interesting videos I came across in regards to the WGA Strike of '07.

A World Without Writers

I get why they are still striking. I'd be pissed too if I was making webesiodes, not getting paid for them but yet the execs are selling ad time. That's bullshit. BUT it's starting to effect my fave shows and that's not good. LOL I've only been a TV junky for about 2 years, if reality TV takes over the airwaves I'll be back to being an occassional watcher.

I read a report about how this strike will get american producers to buy up candadian shows, unfortunately this will also fall in the greed pot where producers will get richer off of selling old content whereas us slugs in the industry won't see the pay off. And serisously the writers don't have it bad, if you compared what they get to what PA's and such get, for the amount of work that gets done its definately not fair, the lower you are on the hierachy the more you get screwed, there is no trickle down. My biggest pet peeve is actors, on my show our main characters get more in per diem per week than I make before tax not to mention they get paid more than the directors and writers. If you ask me the whole thinking of the industry needs to change especially in Canada because it won't be long until we can't sustain the industry.

i love the last video, haha