I was sitting in my new Directing class last Thursday and it hit me that half of the people in it had glasses. I have nothing against folks with glasses (although I don't wear them), but it was the stereotypical thick rimmed black 'filmmaker' frames that really caught my attention. Do people go out of their way to get these when they decide they want to be a filmmaker? Half of the class is about 10 people, and it didn't matter if it was a guy or a girl they were still wearing the same style. 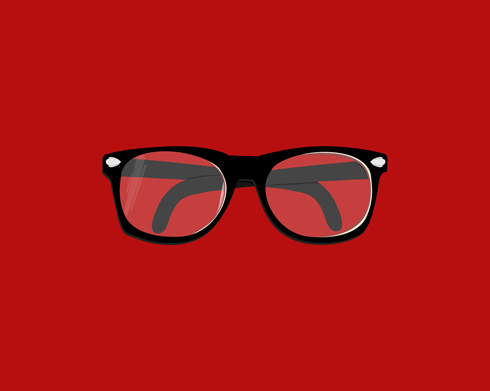 I've often considered myself outside of the expectation of what a filmmaking student should look like. I'm not 'artsy' looking, and have got the 'well, you don't look like a stereotypical film student' comment from new faces a few times. I'm not saying I've got it right, I just want to know what's the deal with the glasses!?

If the first few paragraphs didn't make it clear, the class lent itself to a lot of reflecting. It's not that don't care about the material (in fact I should be more interested considering it's a 4th year production class) but I feel that in so many ways I've already experienced, and put to use, what the prof is drawing diagrams of on the board. This kind of comes off as arrogant, but to be fair, I've done a handful of festivals so far and have gained a certain level of confidence from having my submissions accepted, and twice as often rejected. This kind of relates to some of the previous posts that I've made where I've expressed my desire to get passed all the prep for something more practical and real. I sat through class mostly feeling anxious about putting the lessons to work, and kept myself focused by doodling. Am I really paying for this? My attentive student skills seemed to have melted away in first year.

Don't get me wrong, there's still plenty I feel I need to learn, however I'm skeptical as to whether I'll learn it here. No matter how much practical training you really get, especially in the arts, it seems twice as valuable to learn through trial and error. There's also a fine line between how much responsibility I think the school has and how much I have in preparing myself for what I want to do. I guess it's fair to say that directing class is getting me thinking, maybe randomly, but in the right direction . . . I hope.

Without my dark director's eyeglasses, my career would have never taken off. My advice to anyone who wants a career as a film director is to get a pair; the closer they resemble Buddy Holly's glasses, the better!

mr. spielberg, if only it was really you visiting my blog! can i get a job?!

I was going to say the only purpose of all your schooling is to get your first job.

Then it will depend upon your performance how well you do.

Actually film school has nothing to do with getting a job anyone off the street can and do get jobs in the industry. Film school is good for creativity.

I too once came to the same conclusions as you Luke, I went as far to wonder why are all these blind people so interested in visuals? if you are different the better off you are. Sure I have glasses but not that kind. I have gotten the same response"You do what? You don't look like them? I know they have jesse pictured in their minds. But honestly I beleived it worked better. Film is a social tool, those that are locked into being a film student person whatever are basically sellouts of a different kind. They give up one set of beliefs for another not realizing that they give up themselves, their mind and the way they use it. I hung out with enginerds and business people and teachers and tech students, you look at it all and balance what works for you. Art(which they like in film school) vs. what real people think and then combine the two to make something that makes sense in both views. In my case I applied what I wanted when I felt fit and in most cases I think I shocked a lot of people because they expected onething, it also helped my grades I did some shitty projects but got killer marks and I think it was just the expectations being broke, art people didnn't think they could relate to soemthing about sluts it just not PC. Either way being connected with others and hearing their views I think made me a lot more diverse, effiecent and accurat in my thinking and application to film.

i guess school is a bit of both isn't it? getting your foot further in the door than someone off the street and exploring your creativity further.

I'm a director who wears thick framed glasses. They just look better on my face. I'm a big guy with big features so I need big glasses. I have a pair of smaller wire frames that just aren't me.