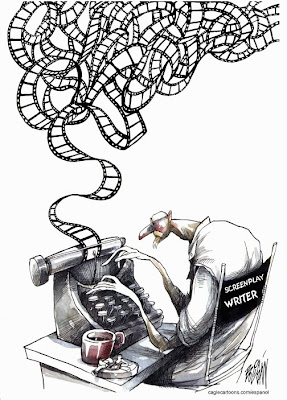 At times I find myself being fascinated by the simplest things. Moments of essentially little consequence, that only in the right frame of mind seem to trigger reflection or inspire me to think out a scene for a screenplay I haven't written yet. I doubt that this is uncommon as we all have moments that are conveniently entertaining, but I've discovered that the more I can absorb these moments the happier and more self assured I become.

For instance, today I was at Walmart and overheard someone say 'I have no idea where my car is, I parked somewhere out in the boonies'. I started to laugh because I refer to the 'boonies' all the time, and until hearing this other guy say it I thought to myself that I have no idea what that means. I guess it's just slang for the middle of nowhere, but still, boonies? When did that catch on and where did i pick it up? Pointless, I know, but there are a lot of dumb sayings that I've embraced over the years.

Also, today the temperature reached a new record high in Regina, beating a previous high from the 1920s. It was 37 degrees Celsius, the kind of hot and humid weather that makes you feel like you just got out of the shower and can't seem to dry off. The dorms are pretty good, I have AC in my room. My one roommate though, or person who also has a dorm here (roommate sounds like we know each other) insists on opening the windows on a daily basis (which leaves me following behind to close them). His reasoning for this could be to let out the smell of his cooking or maybe he likes fresh air, but all I can think about is that the work it took to cool off the place is lost in 5 minutes. Not to mention all the energy it wastes. Plus, how does 37 degrees feel good unless you're on a quest to turn your shoebox of a room into a personal sauna?

My history in residence is full of stories like this that both irritate and entertain (after the fact). There is enough material here for numerous seasons of a residence based sitcom. I'm a white guy in College West (the dorms) which puts me in the minority to a largely Asian population (especially during the summer when most Canadians have gone back to live with their parents or whatever). The cultural differences can be vast. Although, what I may justify as cultural differences is more likely the general stupidity of a select few.

I've learned to deal with residence life so when it came to the open windows on one of the hottest days of the year, I was once again cheerfully shocked as opposed to angry. In contrast, I've experienced everything from the routine loud music and roommates, to people using the toilet as a garbage disposal, cutting their hair in the kitchen and leaving it, and cooking food that smells like the sewer backed up. It's far from glamorous, but it's the kind of fodder and abuse that breeds creativity. No doubt, building character in numerous ways too. Any how, I've left a note on the windows, hopefully we can save some AC now.

The cherry on top of the day was getting a Slurpee (or technically a froster) at macs. With it being so incredibly hot, the machines were overworked and some of the Slurpees were pretty runny. A kid came up, maybe 8 or 9, and as he turned the lever to fill his cup a rush of liquid just sprayed all over him (clearly inexperienced). Noticing the obvious shock of the kid, and trying to hold back laughter myself I turned and said what anybody in that situation would say, 'that sucks'. Probably actually cooled himself off anyway, so, lucky kid. Not that I thrive on the bad experiences of others or anything, but it's the hiccups that keep things interesting.

Sometimes it doesn't take much to make a good day.
Edited by Editing Luke @ 12:58 AM

You have a great attitude.
That will take you far.

Here's some stories for you, Boonies is actually from roman descent, it was the name of a township that was at the outskirts of the roman empire. It was so far that it didn't really have roman rule and it was full of thieves and other criminals. For this it became a main trading port for the empire to receive delicacies from other cultures, material etc. Think of that place where Russel Crow first started his journey as Gladiator and that is what Boonies was. Second your hot day was not the hottest day in record. The hottest day on record in Saskatchewan was July 5th 1937, it reached 45 degrees celcius in Midal and Yellow Grass SK. This is also a Canadian record. That very day it was 42 in Regina and it was one of the longest hottest summers in our history.

well aren't you just a wealth of info mr. hobo sir. i didn't know that boonies had a roman empire connection, but that's kinda cool. i also checked it out in the 'urban' dictionary online and it says it is also known simply as the 'sticks' or like i guessed 'the middle of nowhere'. to clarify on the temp record, you are correct that July 6 was not the hottest day ever in regina or saskatchewan, but Friday July 6, 2007 set a new record of 37 degrees for the day, beating out 35 degrees on July 6, 1924. quite frankly, i'm glad we didn't set a new national record.

Me too also just so you know I made the boonies thing up.

i figured as much, but i've never been one to crush others creative license with history, haha. plus, it was a good story.

"At times i find myself being fascinated by the simplest things. Moments of essentially little consequence, that only in the right frame of mind seem to trigger reflection or inspire me to think out a scene for a screenplay i haven't written yet."

--I've never met anyone else who understands this. I've enjoyed browsing through your page, thanks for being so entertaining!!