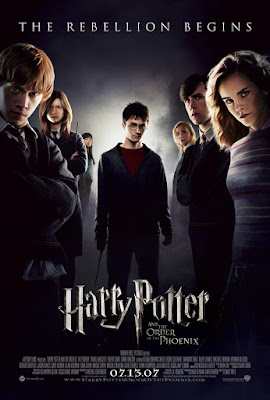 It wasn't really all that long ago that this craze got started, but still I can't say that I understand the madness behind it. Last night I gave in and saw Harry Potter and the Order of the Phoenix. Had my friend not wanted to see it I probably would've waited until it came out on DVD, but like what has happened with the previous Harry Potter movies there is always someone who wants to see it near opening.

I don't mind the Potter movies, they're entertaining enough, but I haven't read any of the books and it usually takes me the first 30min of each movie to remember who everyones name is again. Apparently, I was in the minority last night.

We headed to the Galaxy to see two movies because it was cheapie Tuesday and two movies for $10 is better than one on any other day. We bought both our tickets when we got there at 6:30, saw License to Wed (an enjoyable enough comedy) at 7:15 and got out with 20 minutes until Potter at 9:30. And I'm sure you're reading this because you were wondering what time the movies played last night . . .

We both expected it to be busy, but I was naive about the whole thing. Coming out of the first movie we see a huge line up around the doors specifically for Harry Potter ticket holders. I thought, well screw that, we already bought our tickets way earlier and we're already in so let's just go stand by the theatre until they open it. That was wishful thinking.

We stood there until the theatre opened about 10 minutes later before the guy standing there said, sorry we give first preference to the people in the line. I looked back at the line and knew I wasn't going to go to the back, so we went to the second checkpoint . . . and got the same response. Sure, fair is fair, but we did buy our tickets at 6:30 waiting in line at the theatre and we were already passed the lobby so it's not like we were really scamming the system. Not wanting to put up with the nonsense anymore, we both just ripped our own tickets and pretended we were part of the meandering line and got decent seats in the back row.

I've never been a fan of opening weekends (or weeks) because of the crowds and the resulting full theatre which makes it tough to lounge comfortably. It's an experience though, and it had been a while since I'd been to a sold out show. I ended up sitting next to a nut-job though who was there alone but talked to the screen throughout the movie. He commented continously on how cool it looked to himself, but he also struck me as the kind of guy who probably thought he was watching a documentary about wizards.

Wizard-boy also brought a stupid little laser pointer which he insisted on playing with throughout the previews and acting like it wasn't him doing it. Thankfully he didn't do it through the movie, but the general awkwardness suggested that he probably didn't get out much.

The movie itself was probably the best out of the 5 so far. The effects and action have improved, and it didn't feel like it dragged on as much as the others. Pretty much if you liked the series so far, you're bound to like this one too.

All this brings me back to what's the big deal though? What am I not picking up on? Maybe I should read one of the books, or maybe people are just hard up for fantasy films these days. I don't know, I probably just didn't jump on this bandwagon soon enough to get swept up.
Edited by Editing Luke @ 9:36 AM

I don't get the Harry Potter thing I tried watching the first one and I couldn't sit through it, so I have had no urge to even see a preview for the next 4 (5 holy crap I thought this was 3), this also goes for Pirates of the Crapabien, and Labernyth. The stories are to far fetched for me and they loose me in the opportunity to make me escape into their world. I think this might be the answer to why these shows are so popular, maybe our society is so selfish and lonely that these exaggerated mind-scapes are the only place for them to go, to feel connected by being isolated like the characters. Its like that emo music crap, "I'm so lonely, I'm so unappreciated" blah blah, then reaction hey thats my life, I relate, I like these guys, its me, even though its not you and if you'd get out more often you wouldn't be such a loser. On another note I seen Transformers on opening weekend and it was gold, simple and everything it needed to be. Sorry about the rant.

you make an interesting point, alpha-males are pretty popular these days. and i'm thinking maybe because i've always felt like a follower to the harry potter trend as opposed to being a leader and actively pursuing it i haven't enjoyed it as much as someone who was with it from the start. i like some fantasy, not much of a lord of the rings fan either, but LABYRINTH, jim henson is a genious and i was on that band wagon from the start! and that's no joke! haha.

LABYRINTH was Jim Henson??? did not know that, either way it was strange, it failed to have me totally buying into it yet it was slightly captivating for me. I guess I like shiny things. Oddly I am a LOTR fan, I thought I wasn't going to like it and then the story pressed and I bought it, there were times though I didn't, like after the first half hour of ending. Even odder is the Matrix, I am all about the Matrix, by all means it can fit into the fantasy category yet doesn't seem to. And of our day and age I would class it as the greatest achievement in our industry and I think it goes almost un-noticed a lot of the time. It is a weird enigma to me and the industry and I think that is my fascination with it. Also its shiny.